N – It is a stormy night at Camp Lutherlyn. The sleep-out is cancelled due to the storm. Hurricane-force winds pound the old-growth pine forest surrounding the cabins, rubbing the tree branches against the windows and outside walls. The wind howls through the grove. The rain pelts the windows and forms pools of water in the walkways joining the cabins. Inside cabin “Faith”, the girls huddle in the semi-darkness. The only light comes from the glow of Mikayla’s iPhone. The Bluetooth speakers vibrate to the beat of K-Pop.

C2 – At least the music is drowning out the storm outside. (She stands in the middle of the cabin, dancing to the music)

C2 – I’d rather listen to music than the wind howling outside.

N – At that moment, a lightning bolt flashes. Thunder cracks.

C2 – We all love the music, don’t we, girlfriends!

CC – We are kinda like the people in the bible.

C1 – Well, we’re not sleeping. And I’m pretty sure he wasn’t listening to K-Pop.

C2 – What did they listen to back then?

CC – I’m not sure. The bible does mention harps and lutes and stringed instruments.

C1 – What were prophets?

CC – Prophets were people who listened to God’s voice. They told the people what God had to say to them.

C1 – I can’t hear myself think in all this racket! Can’t we listen to some Daya?

CC – While Samuel was trying to sleep, God was trying to get his attention. But Samuel thought the interruption was the old priest, Eli, sleeping in the room next door. And this went on for half the night.

C1 – Did Samuel finally get that God was trying to talk to him?

CC – Samuel didn’t know it was God at first. He needed help.

N – A large branch crashes against the building.

C2 – Do you think God is trying to tell us something? Ha-Ha! (laughing)

CC – The old priest, Eli, told Samuel the next time he heard the voice of God …

C1 – Can we change the music, PLEASE!

C2 – Why is it so bright outside? (looking out the window)

CC – Put on your rubber boots and raincoats, girls. And don’t forget your flashlights! Remember the buddy system!

N – Mikayla opens the door and the girls walk outside into the open.

CC – It’s beautiful to be in God’s creation. God is good. God has protected us through the storm. And we are not alone. We have each other. 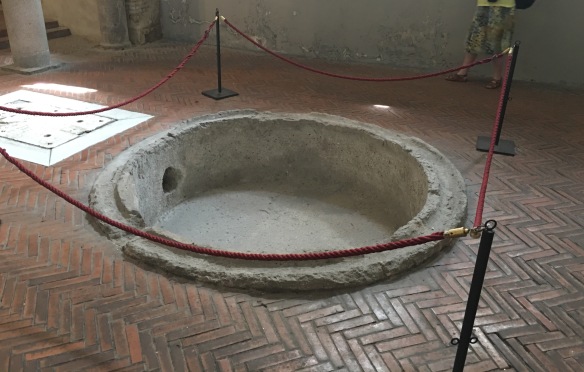 I am reminded of your sincere faith, a faith that lived first in your grandmother Lois and your mother Eunice and now, I am sure, lives in you. For this reason I remind you to rekindle the gift of God that is within you … (2 Timothy 1:5-6)

In his affectionate and encouraging letter to Timothy, Paul uses language that suggests Timothy’s faith is as yet undisclosed. Or, his faithfulness is in question. Paul uses a rhetorical, emphatic form of speech — “I am sure” — in the middle of his affirmation. In the letter Paul exhorts Timothy “not to be ashamed” of the gospel.

Paul then validates Timothy’s faith by appealing to his elders — his mother and grandmother. Surely theirs was a robust faith! Surely their faith was recognized by the community, evident by some religious standard:

But, Timothy? He doesn’t seem to be doing the same things or in the same way his parents and grandparents did. What’s wrong? Is Timothy able to take on the mantle of leadership for which Paul is grooming him? Surely the apple couldn’t have fallen too far from the tree! Surely, this faith that so lived vibrantly in his family must also be somewhere in him. Paul even exhorts Timothy to take some responsibility in fanning the flame of faith in his own life — to ‘rekindle’ this gift of God hidden, up to this point in time. Bring it out to the open!

When we meet Timothy here, he has not yet expressed his faith in a way recognized by the community. Or in himself. And obviously he needs encouragement to get going. This first chapter in Paul’s second letter to Timothy is all about encouraging Timothy and building him up by reminding him of the seed hidden deep within his heart.

Retired pastor of our church and former chaplain general of the Canadian Armed Forces, the Rev Stanley Johnstone, wrote recently about something unexpected that was found during a restoration project of a Hawker Hurricane aircraft. A Hawker Hurricane was the main fighter aircraft of the Royal Air Force and other British Empire air forces early in World War Two.

During the restoration process of this aircraft, which had been recovered from the bottom of the English Channel, the workers found something in the engine compartment that was not supposed to be there. It certainly was not in the original technical specifications. On a small chain was a medallion of Saint Joseph — patron saint of travellers, workers and the universal church. This medallion had been very carefully installed such that it was not visible and would not interfere with the aircraft during its service life.

You can only imagine the day this aircraft was first assembled, when it received its engine: The worker had placed this medallion hidden deep in the engine compartment. She (the great majority of factory workers were women) did a very deliberate and purposeful thing. Had this addition been discovered by an inspector, no doubt she would have been seriously reprimanded about putting foreign objects into an airframe.

She took a risk, and did it anyway. She had obviously thought through it carefully. Cleary, her prime concern was for those who would have to fly this machine under grim and stressful circumstances.

In a sense, this was the worker’s way of expressing her faith. She was offering, in her own way, a prayer for wartime pilots, many of whom were just out of high school. It’s wonderful to contemplate that we, some seventy-five years later, would be able to appreciate her prayer — her expression of faith — that at first did not go recognized. Even the pilots who flew that Hawker Hurricane didn’t know about the prayer being offered for them, but was still hidden close to them, in their most dire circumstances. (1)

In Paul’s letter to Timothy not only do we learn about the nature of faith — as a gift from God — we also are challenged to consider how this faith is demonstrated from generation to generation.

This morning we baptize baby Sebastian. Infant baptism is a practice that first and foremost recognizes faith as a gift from God, supported through the faith of parents, grandparents and the community of faith surrounding him. In time, and with support, we pray the seed of faith planted in Sebastian will grow and flourish. We may not be able to see this faith according to our adult standards as yet. But that doesn’t mean the seed isn’t there, or even that Sebastian isn’t expressing his faith in his own, baby way.

Many of us who have been around the church for decades are concerned that younger generations today aren’t doing their share anymore, or doing faith in a way we have come to recognize it.

Younger generations, we say, aren’t committed to the same projects we have always supported. Younger generations aren’t buying into ‘doing church’ in ways that for many of us have been a source of great comfort and meaning over the years.

But, as Marshall Goldsmith expressed in his book, “What Got You Here Won’t Get You There” (2). Perhaps we should borrow his title as a good mantra for the church today when it comes to the variety of ways we can express, and give form, to our faith, moving into the future.

Making adaptive change in the community of faith doesn’t mean the gift of faith is not present anymore, deep within the hearts of our children and youth. It doesn’t mean there isn’t a deep longing for connection with God among younger generations, to find meaning and making a difference in the world today.

We will sometimes confuse the form of faith with the function of faith. And, the church today may very well be challenged to consider a more public, outward/external expression of faith. Thinking, for example, of our programs as how they meet a public or specific community need rather than an internal need.

What our younger generations need is to be encouraged, like Timothy was by Paul, to appreciate the gift of faith within them. And to find ways of expressing that faith that are meaningful to them. And to support them in their initiatives. That’s a worthwhile cause! It starts by asking them: What would you like to do? And then supporting them in doing that.