Reading from the bible can be scary. Sometimes a faithful reading of the bible will not bring calm and assurance. Just the opposite!

Today’s scripture can evoke fear.[1]When Jesus talks about Herod’s glorious temple crumbling to the ground and being betrayed by family members, our eyes widen in apprehension and we shift uncomfortably in our seats. Fearful of the future. What will it bring? Is God’s future good or something to fear. We do know, the way there won’t be easy.

From the Gospel, Jesus exposes two false ways in which people of faith try to deal with our fear. By that, I mean, strategies that we have employed for thousands of years in order to combat our fear. While these methods may be effective in allaying our fear, they also serve to block the way we connect with God.

The first such strategy Jesus exposes is our attachment to, and almost exclusive dependence on, what we build. Even, as we say, to the glory of God. These buildings. Glorious, adorned with carvings, intricate stained glass, spires making confident bids to the sky, and arches perfectly rounded and balanced. Architectural master pieces. To say the least.

The pulpit alone, in Montreal’s Notre-Dame Basilica, is a wonder to behold. It is a sermon in itself – its spiraling, narrow staircase winding itself up into a small yet regally appointed platform high above the nave. 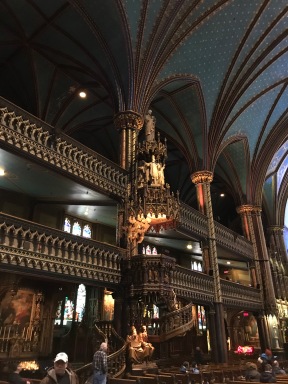 King Herod, for Christians reading the bible, was a paranoid despot. He killed innocent children was ruthless in defending and protecting his hold on power. Because he was afraid, afraid of losing it.

For historians and archeologists, however, he was a builder par excellence.

King Herod started building his temple in Jerusalem two decades before Jesus was born. During the time of the build he more than doubled the size of the temple mount. The temple proper was completed in eighteen months. But work on the outer courts and decorations continued throughout Jesus’ lifetime and still some thirty years after his death and resurrection. During this impressive season of building the temple, people gathered under the large colonnades and porches to hear speeches and witness healings.[2]

Less than a decade after everything was completed on the Herodian temple, it was pretty much destroyed by the Romans in the late first century. Jesus’ words in the Gospel text for today, calling for a day “when not one stone will be left upon another; all will be thrown down”, speak to events that were happening in the lives of Jesus’ followers during this time of the destruction of Jerusalem and its glorious, magnificent temple.

In reading this text carefully, however, I realized this is not just about buildings. Jesus isn’t just criticizing those who put all their religious stock in bricks and mortar. Jesus is exposing yet another related strategy for dealing with our fear. Not just in the glory of the buildings, but in the way we speak to one another and relate to one another. Not just in glory. But also in power.

It was, after all, the authorities who made the rules, sold the animals for sacrifice and mediated the people’s connection with God.

At root, the religious authorities persuaded the people that their relationship with God could only be mediated by the authority’s permission. If you didn’t follow the rules and authorities, you were not justified or in right relationship with God. The whole culture, the spiritual climate, surrounding the temple served to choke out freedom of a personal and direct intimacy with God.[4]

The Russian novelist Dostoevsky wrote the dismaying story with the title, “The Grand Inquisitor” in The Brothers Karamazov. The old cardinal of the church hears that the real Jesus has come suddenly to his town. The cardinal is alarmed that Jesus healed a blind man who had been coming to his church. Then, he hears that the real Jesus who has come to his town raised a young girl from the dead.

When the cardinal confronts Jesus he asks him: “Why, then, have you come to interfere with us?” He wants to rid the town of Jesus, because in his mind what Jesus did long ago is done far better by the church today. In other words, the cardinal has to admit to himself, the church does not need Jesus.[3]The cardinal really couldn’t give up the power he had. Not give it up for anyone. Even Jesus. The cardinal was afraid of losing his job — what it would mean for him and the church …

Seeking glory and defending power seem to be effective ways of dealing with our fear.  We attach ourselves to symbols and expressions of glory in our culture – the tallest buildings, the fastest cars, celebrities, newsworthy leaders and victories on the battle fields of life. This brings comfort, though momentary and fleeting. Because we can never be satisfied operating in this consumer and acquisition-fueled culture. There’s never enough, or it’s not good enough. Ever.

Jesus suggests we must learn a new language. A new way of being, with God and with one another. A way, marked not by successes in the eyes of the world—there were lots of tourists in those houses of worship we visited in Montreal. The world approves. But will we walk a different way – a way marked by love, faithfulness in suffering, and generous giving in the face of poverty, suffering and our fear?

Throughout the Gospels, the religious authorities asked Jesus for a sign of his authority. And, he never satisfied them with his answer. His answers usually appear to disturb their sense of right and wrong.

The truth, when it comes, seems to turn upside down our initial ways of thinking and doing. Here, Jesus says, “For I will give you words and a wisdom that none of your opponents will be able to withstand or contradict.”[5]

These opponents were neither stupid nor un-educated. In fact they were the most articulate and brilliant of the age. So, there is something altogether different going on here. A different way of being with God. A way not encumbered by discursive thought and debate. A way not intimidated by rules and regulations and conditional statements of belonging. A way not defined by glory-seeking persuasion nor forceful coercion.

The confirmation class the other night reflected on the meaning of the Trinity—God the Father who creates all, God the Son who is with us, God the Spirit who gives us strength. On this poster they cut out images from magazines to place in one of three designated areas on the poster. These images evoked for them the meaning and feeling of what God is up to in the world today, through the various persons of the Trinity. 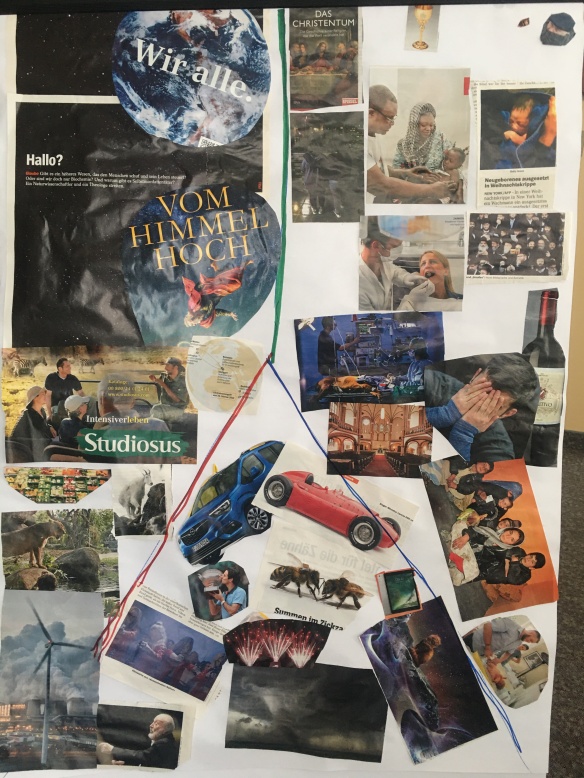 In reflecting on the experience of doing this exercise afterwards, we pastors admitted this was rather an abstract exercise. We weren’t just memorizing definitions of the Trinity from the Catechism, difficult enough as that is! But in engaging the confirmands on another level, we began to see more than we thought possible.

We discover that we don’t find God by building glory or defending power — ways we use to avoid confronting our fears of the future. Rather, the good news is that God has already found us. In this world. In our lives. And in a multitude of ways.

Making this link, this connection, is much simpler than all the methods we have devised to combat our fear. We don’t need the tallest and most beautiful buildings to assert God in this world. We don’t need to merit, or qualify for, our relationship with God by building skyscrapers or getting straight A’s in school.  We don’t need degrees and a long pedigree to justify ourselves in faith. We don’t need to arm ourselves with book knowledge in order to defend against some opponent whether a family member or stranger.

All we need is an open heart and a desire to love and trust. Following Jesus is about going directly to intimacy with God in our deepest selves. And God is there, right there, all along.

We can respond, then, not out of fear. But out of the love of Christ for all and in all. Forever.