We ran all-out with back packs and walking poles to catch the bus. Yes, we were on a walking pilgrimage. But a few of us didn’t feel up to walking through one of northern Spain’s downtown city streets. After hiking a couple days already through the beautiful, peaceful hills along pristine trails with spectacular ocean views, the thought of breathing gas fumes and hitting the hard top sidewalks in an urban jungle just didn’t appeal. It was only three or four kilometres, and a city bus conveniently would take us to the other side where we could pick up the pilgrimage trail out in the open again.

As I clambered onto the bus behind my Dutch walking partners with all my gear, mindful of not clobbering someone with the swing of my bulky pack, I realized I did not have the correct change for the single fare ticket. Without any hesitation, my pilgrim friends dropped enough euros to cover my ticket. I expressed a deep-felt thanks to them, making a mental note to treat my friends later on. “I owe you coffee,” I said as the bus wove through San Sebastian’s downtown core. 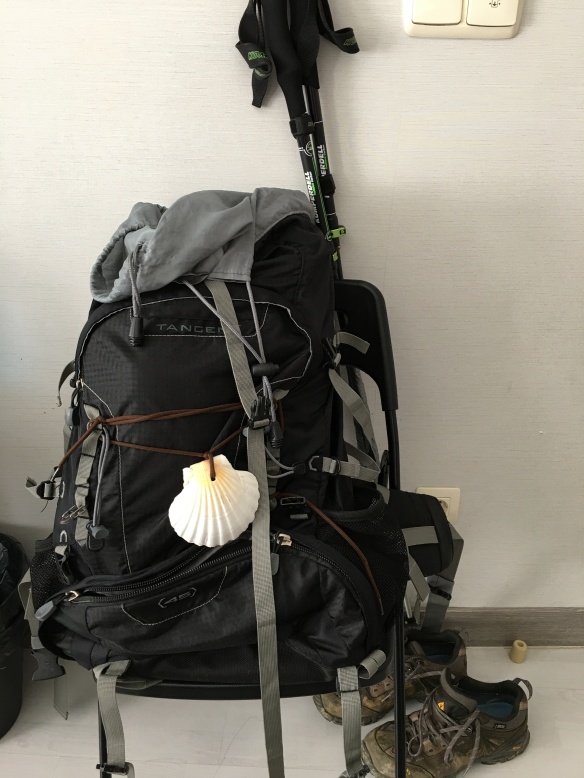 There’s a culture on the trail among pilgrims that doesn’t operate according to the normal etiquette of life back home. You see, early the next morning, my friends wanted to get going right away. I, on the other hand, wanted to stay at the hostel of my name’s sake (San Martin) a little longer to enjoy the view and the home made breakfast offered by the hosts. Off they went, and I never saw them again. I didn’t have a chance to ‘repay’ their good deed done unto me.

At the same time, there were other pilgrims to whom I’d catch up a few nights later at another hostel. Everyone walks at a different pace. Paths would cross, un-cross, and cross again. Sometimes I’d meet someone on the trail and never see them again. Other times I’d bump into the same group every other day, or so, somewhere along the way. Because of the nature of the pilgrimage community, I looked for opportunities, therefore, to treat another fellow pilgrim at a roadside café whenever the opportunity arose.

The economy of quid pro quo – paying back another individual and keeping the economic scales even on an individual basis – just couldn’t operate neatly on the Camino. It didn’t matter to whom you were being gracious. Only that you were gracious – that you offered help when help was needed, to whomever, regardless of whether or not they had earned your favour in some way earlier on.

The challenge was to receive the gift when it was offered, and give a gift when it was needed. Period. It was as if, on pilgrimage, we were all in the same boat. Which, of course, we know before God we are. It’s just in our daily lives we are not often able to appreciate that reality clearly.

Forgiveness is the theme in the Gospel text for today[1]. I’ve wondered why the servant who was forgiven his debt didn’t do likewise when given a chance. A more general question, is:  Why do we find it so difficult to forgive one who ‘owes you’ an apology for some wrong committed against you. I think it’s important to understand first some elements of the Gospel story. Because this story first tells us something very important about God and God’s ways.

To begin with, the servant owes the master ten thousand talents. ‘Ten thousand’ here signifies an absurd amount of money.[2] In that day and age, even if the servant lived three life-spans working full-time, there was no way he could ever repay that amount. The master has pity on him because the servant pretends that he can somehow work hard enough, in his plea for mercy, to repay the debt. The absurdity of the extra-ordinary amount should tip us off to something vital in our understanding of God forgiving us:

There is nothing we can do to make our lives right before God. And what is more, God has already forgiven us, and reminds us over and over again that we are forgiven before we do anything. Yes, we can say we ‘owe’ God. But no matter how hard we try, no matter all the things we can do to make it right, this effort will never, ever be able to erase what is stacked up against us – all our moral failing, our mistakes, our brokenness.

We puff ourselves us up in embarrassing, false piety when we pretend we can. As if forgiveness was simply a matter of paying our dues. But it isn’t. Like true love, forgiveness is a function of grace. And, oh, the Lord has compassion on us, even in all our futile toiling and striving.

It’s so easy not to apply God’s economy of extraordinary grace to our ordinary lives. It’s so easy to slip into the transactional ways of our world, and apply the values of the culture to our life of faith. Meaning, we don’t really forgive others when they have to ‘earn’ our attention, our love, and our friendship. We will not really forgive others when they don’t behave in a way that meets our approval.

We live in a transactional economy – even in our spirituality – where people have to pay for their sins. We are to a large extent products of our culture. Our view of justice, therefore, is naturally retributive. Whereas God’s economy is about transformative justice. To move from one to another calls for a monumental shift in our thinking.

God’s grace, indeed, “surpasses all our understanding” (Philippians 4:7). God’s economy of grace does not make sense in our quid pro quo culture of transaction and merit. God’s love crosses all these boundaries and systems of our making. The gift is simply given. Will we receive it, freely? Will we pass it forward, freely, without any expectations nor strings attached?

In God’s economy of grace, we move from transaction to wholeness. Love and forgiveness – these functions of grace – expand outward. There are no losers in this economy. Only winners.

A transactional economy goes something like this: If I have twelve, gold coins and you take six, I will only have six left. I’ve lost. You’ve won. And so it goes with everything we do with others in life. Someone described our culture this way, sadly: We love things and we use people.

In an economy of grace, in contrast, we love people and use things. It’s as if I had planted twelve lily bulbs. I can divide my bulbs and give you twelve and I will still have twelve left. Then you can plant your bulbs and eventually you can give away twelve more. Grace multiplies. Everyone gets more. Grace is infinite, in truth. The win-lose economy changes into a win-win economy.[3]

Moreover, forgiveness is not just about evening the score between just two individuals. It’s not entirely a private act. Forgiveness is communal.[4] When, in the Gospel text, the others saw how unjustly the servant treated his own slave who owed him money, they didn’t simply wipe their hands in denial and avoidance of the injustice before them. They went back to the master and told him. The proverbial whistle-blowers, they were involved in the process of forgiveness.

This is necessary, because sometimes individuals are guilted into forgiving someone who is left unchallenged, unaffected, and unaccounted for their misdeed. Sometimes victims are not able to easily forgive the one who has hurt them. It took Joseph all the way to the last chapter in Genesis to finally forgive his brothers for throwing him into a well and selling him to slave-traders.[5] As they say, it takes a village. And sometimes time. Lots of it.

Forgiveness is validated in community. Because sin is something we all participate in. If we are human and live on this earth, we will sin. No matter the colour of our skin, no matter our creed, our ethnic background, no matter where we were born or what our political stripe. We will make mistakes. We will all contribute to the problems we face. As Paul wrote, “since all have sinned and fall short of the glory of God”.[6] No one is immune to the complicity and consequence of sin. It is woven into the fabric of our common existence.

And so is forgiveness. When forgiveness is offered and received, it becomes part of a wider field of responsibility and accountability. We are not alone. We need the community of faith. We need to be real. Forgiveness does not mean enabling sinful behavior to continue by excusing it, or letting it happen over and over again. Forgiveness means people of faith seek the justice of the matter. Forgiveness can only happen when people see their own lives as part of the human condition, just like everyone else.

May our hearts be moved to forgiveness and justice for all.

Our Father in heaven …. forgive us our sins, as we forgive those who sin against us.